Year 2018 is like a dormant year in stock market for me. I bought one stock and sold one partially in Q1. That's all.

It seems like most investors do not have a great 2018, I am not an exception, my portfolio lost 28.8% which is pretty bad.

I guess most people already sensed that 2018 may not be a good year. That's why I didn't plan to buy any stock in 2018, since I didn't really have the time and energy to do so.

The mistake I did was I didn't sell, and just kept all the shares under the pillow. Perhaps I did't expect it to be that bad at that time.

Table below shows the stocks that I held throughout year 2018. ALL of their share prices declined in year 2018 except Scientex. 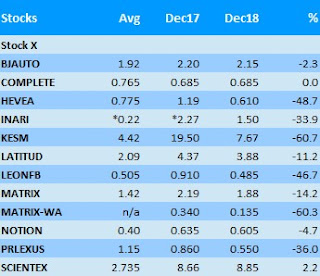 The gain/loss calculation above does not include dividends received. So if dividends are included, BAuto is another stock which gain slightly in year 2018.

KESM, Inari, Leon Fuat, Hevea & Prolexus all declined substantially. Hevea is the stock which used to have >100% paper gain but it has now become loss-making. The only consolation is that I don't hold a lot of Hevea shares. 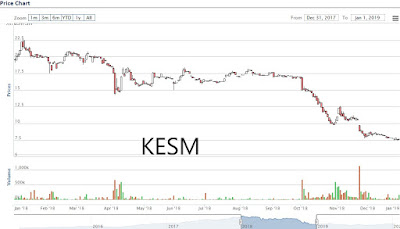 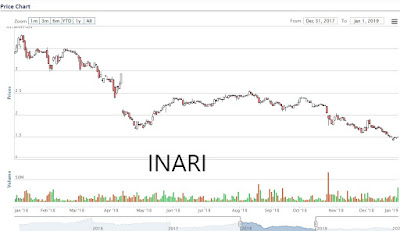 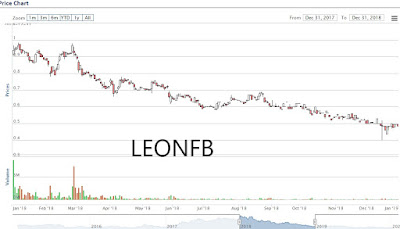 KESM which dived from RM22.50 to RM7.50 hit me quite hard. Fortunately the one and only stock that I sold partially in 2018 was KESM.

I sold almost half of my KESM shares at RM20 in early 2018. If not, my loss will be much more. I should have sold all in hindsight.

Besides, Stock X also dropped a lot in that year, almost 30%.

Like I mentioned earlier, don't know why I still managed to buy one stock in early 2018 even though I planned not to do so. This particular stock turns out to be my worst investment so far.

This stock is DAYA. This is more like an "opportunistic" buy for me. Daya is nothing close to a fundamentally sound company, just planned to hit and run.

Daya suffered heavy loss due to some impairment loss and I bought in anticipation of better results after disposal of all those loss-making assets in O&G.

Furthermore, Daya was also being awarded a few contracts in early 2018, including construction of a 10-storey new Penang KPJ Specialist Center building.

Its balance sheet and cash flow even though not good, it didn't look that bad to me frankly. The truth that it later defaulted bank loan repayment really came as a shock.

So, I must have overlooked something and it just showed that I'm not that good in reading financial report. Still lots to learn.

Anyway I still hold Daya until today even though it might be delisted soon. The price already fell until mother also can't recognize, so I'll just leave it as to buy some hope but prepare for the worst.

In conclusion, the main reason for loss in 2018 is not because I bought Daya, it's because I'm not good at selling shares, as always. When will I get it fixed?

Email ThisBlogThis!Share to TwitterShare to FacebookShare to Pinterest
Labels: Daya, My Portfolio